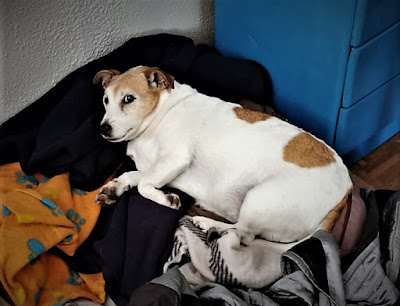 The second blogpost in the series on our family pets features Bella - an elderly Jack Russell adopted by my son from a shelter after she had been surrendered.  Under the impression that her previous owner was Italian, he proceeded to give her commands in Italian.  Although not getting much of a response from Bella, he persisted and soon she would come when he called, "Veni" and sit when he said, "Sedersi" and so on ...
It was only after a number of years that he discovered she had grown up in a Portuguese-speaking home.  This explained the look of confused incomprehension that had greeted his efforts to make her feel comfortable in her new home.
Like most dogs her understanding is based on tone of voice, gestures and routine - the actual language is largely irrelevant.
OJ
Posted by OJ at 00:30